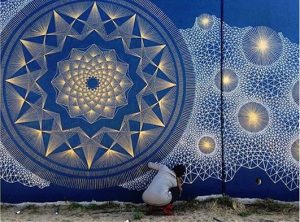 Weaving a world of surreal dreamscapes and captivating geometry, Gemma conjures a sort of Pythagorean quantum mysticism in her work. She plays with mathematical theory inspired by Torsion Field Physics, Sacred Geometry, and our experience of the many dimensions in Quantum theory.

Gemma was born and raised in England in a small village not for from Stonehenge. At the age of 11, her family moved to the United States. She attended the University of Kansas where she studied graphic design. Three years out of college, Gemma was working as a graphic designer in the corporate world, when she decided that she needed a change. In the evenings after work, she would often draw as a way to calm down and relax. She realized that her drawings amounted to something and when she was offered the chance to show her work at Project Hello, an exhibition organized by artist Sandra Fettingis, she took it. From that event, Gemma landed her first solo show at City O’ City. She sold out that show and things have built from there. 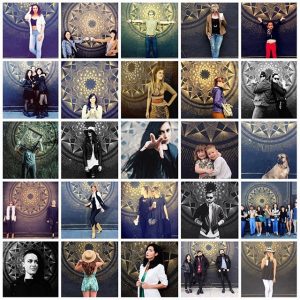 A sampling of photos people have taken in front of Gemma’s mural at Crema.

I had an exhibition at Black Book Gallery and they asked me to paint something on the wall as a part of the exhibition and that ended up being my first mural even though it was an indoor one. My first outdoor mural was actually the one at Crema Coffee House. My friend Noah Price owns Crema and he told me about the wall they have outside. It’s kind of a funny story, originally that wall was rotating every month and they were putting up new pieces every month. The artists weren’t paid, it was just a space to put up our work and just to brighten the community and share our work with others. I did my mural there 2 years ago and it hasn’t changed and so it went from this monthly rotation to a permanent piece without anyone really planning on it being that way because I think the community has responded so strongly to that piece and I still, almost two years later, get some sort of selfie or promotional photo of  someone standing in front of that piece. And even though I wasn’t paid for it, I still get this beautiful feedback and evidence of community participation. I love how people see this work and it’s not like, “that’s Gemma’s art work,” it’s like “hey, that’s my neighborhood. And that’s my coffee shop. And I can stand in front of this piece and feel really good and really beautiful.” It’s hard for me to really say “that’s mine” because it feels like it’s really just coming through me for the benefit of the community and for others. I definitely feel an element of service in the work that I do.

I don’t use a projector; I don’t use any stencils; I build my own large scale compass each time and I never do pre-sketches on any murals. I take the actual space and start breaking down that space based on the divine proportions and so it’s not preplanned; it’s not projected on the wall. I measure it out on the actual wall and then build the compass right there in front of the wall based on what the measurement needs to be. 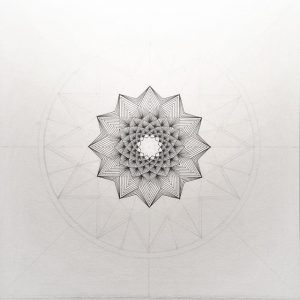 I break it down starting with the diameter of the circle. I pick a really beautiful number (for the diameter) because I think numbers are really important; they’re our universal language. After I’ve laid out the circle, then I start to break it down based on those same proportions used in sacred geometry. I use the compass to break down the circle and a long piece of wood to connect points and start weaving the web. And then, everything else is freehanded. I know it’s not the most environmentally friendly practice to paint murals, so I don’t use spray paint, but I do use these paint pens because they have this really incredible metallic sheen, almost like an enamel paint. The mural at Crema has been clear coated, because at first it was so bright that it would almost blind the drivers when the sun would catch it. So we dulled it down a bit for safety purposes.

I like to use paint brushes when I can, but the paint pens are really fast and often I’m creating a mural on a deadline. I feel really bad about using these paint pens that are just going to end up sitting in a landfill, so I have bags of paint pens that are just sitting in my studio because I just can’t bring myself to throw them away because they’re not environmentally friendly. I’m probably going to have to make an art piece out of them and make some gallery live with it so they don’t end up in a landfill!

I’m inspired by the underlying structures of nature, the divine plan all around us and its sacred geometry.

Where does the symbolism used in your work come from? 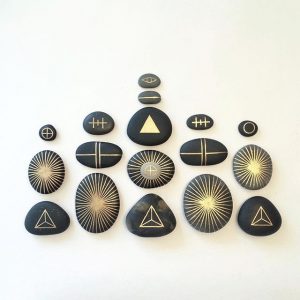 The mandala is a really ancient form that’s pretty much entirely cross cultural. My first mandala came through after a significant healing session and I had started my training in Reiki, which is the ancient Japanese hands-on heal thing art, and I was doing one-on-one sessions and seeing miraculous results with this work. I was getting these really beautiful experiences with my clients, but I wondered how I could take this to a larger scale, how I could reach more people with this sacred healing energy. So, the art really becomes a means to transmit the Reiki energy.

The essence of the the work, is that it takes all these big ideas and brings them down to simple forms. That people can just like it, that they don’t need to know what it means, but it just feels beautiful, that just feels balanced and right in their body because what they’re looking at is essentially a mirror of their divine self. The mandala forms are based on the same sacred geometry forms that our bodies are based on too.

I think it gives the community a sense of ownership and a sense of place. I think that art itself establishes community. Art brings life to what’s sometimes a cold, dark and rigid environment. I think also what’s so important about mural work is that it takes art out of the gallery and lets a lot more people see it. Art is a conductor; it’s an energy generator.

What I was really heavily inspired by was a lecture that I went to see by Nassim Haramein who is one of the leaders of torsion physics. He started talking about these big topics in quantum theory and quantum physics on universal levels and cosmic levels and giving them a geometric structure. He talked about how within a finite boundary, there are infinite possibilities; within the finite boundary of a cell, there is infinite space. He talked about these big concepts like, that you’d never really touched anything because there’s infinite space between your hand an the table. Relating his concepts to basic forms, I started connecting all these dots and it’s funny, because I don’t really get a lot of influence from master artists, but I do feel like I am revisiting the idea of using art for spiritual means.

I think we’re at this cusp of new spiritualism and that art needs to serve during this time of transition and transformation and  to awaken consciousness. 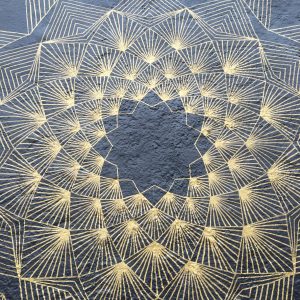 A detail of Gemma’s mural at Crema.

A lot of people don’t know that these are prayer mandalas, so every single line represents a prayer or intentions I silently recite while painting it. With the bike path mural, it was a lot of intention about the water that runs along the creek and having clean water for the city and clean air. I had hundreds of people stop me and say thank you for the work, so I would say a little prayer for them and so their interaction with me ended up becoming a permanent part of the piece. I never told them that and I never told them what the prayer was, but I wished for them to have happiness and peace and joy and abundance and to thrive. These are all constant prayers that I’m reciting. There’s so much energy and intention put into these pieces and I know that people can feel it when they go and stand in front of them or just walk by.

I’m getting ready to revamp my website and the way I present my work. I think that with Optimistic Arts, it has become branded as this one thing, like I do mandalas and they’re always in black and gold. I think that it’s important for me to express what I need to and not to be pigeon holed into this one thing. I’m starting to reconsider what that means, what comes next after that and how I can continue weaving this thread that I’ve started, but make something new out of it. I’m really excited about some new work I’m developing. I’d like to do a solo exhibition in the near future and present new work. I’m not booking any new murals right now, as I’ve recently become a new mom.

I haven’t had a car in years, so to me summertime is riding my bike; and riding my bike fast down those hills along the bike path, and the sunshine, the constant sunshine. Also, I love all the city parks, they’re so well-kept and so expansive. So summertime is just going to City Park or Cheesman Park and bringing a blanket and a picnic and looking out over the mountains. It’s so trite and I know it’s what you’d see on a pamphlet for Denver, but it’s so true, it’s so beautiful to see the mountains out in the distance and to be around everyone playing in the park and smiling under the sunshine. I love those simple things like smelling the roses in the rose garden after a bike ride.

I was definitely on the coffee train when I had a studio above City O’ City and I would get free coffee all day long. City O’ City was like my living room for a while and I would just take my studio breaks there at the coffee bar. Now, I love yerba mate and cold pressed juice. I love to drink plants whether they’re roasted and brewed or cold pressed.

Go see the art! Here’s where to find Gemma’s work: 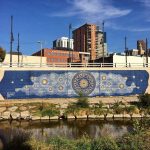 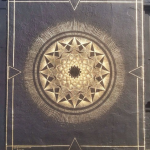 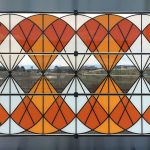 Sandra Fettingis – @sandrafettingis Sandra was born and raised in Chicago, Illinois, but has lived in Denver for 9 1/2 years. She is an artist in residence at Redline and works in the mediums of paint, glass, acrylic and wood.  Continue Reading