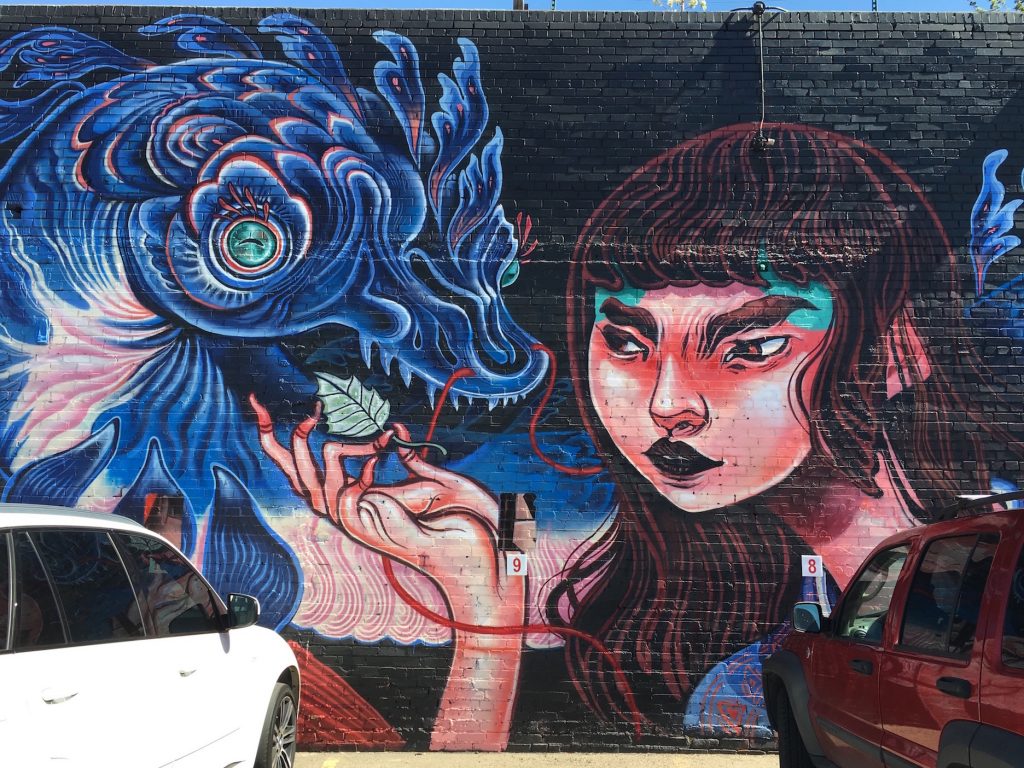 Lauren’s work aims to create and populate a misfit wonderland in which imaginary heroines can address the absurdities of reality in the confines of a page or a wall. Dreams and mythology add to the myriad of influences that stem from her upbringing in Colorado and her time spent at Stanford, writing for Juxtapoz, working at DreamWorks, and teaching English to high schoolers at San Francisco’s 826 Valencia. 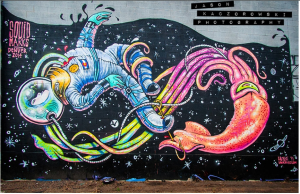 I started by painting little pieces in my house during college. I lived in a house that the students owned, so naturally I wanted to paint everything. Back then, I wanted to use a projector just to paint the smallest thing, haha. Then, when I graduated, I ran into Nychos, a big name muralist, painting in the Tenderloin of SF, and it inspired me to go try it out myself. I was in Denver visiting home when I asked John Lamb if he might have a wall for me and that’s how I started out — with a ladder and a few cans from friends. I painted a squid and an astronaut stuck together in an infinity loop. Looking back, it wasn’t that bad of a mural either! 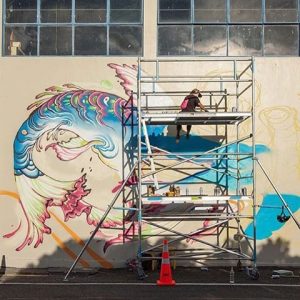 Generally, I assess the wall, come up with a concept, sketch it out and go straight to the wall. I have never used a projector or grid except for when I did an ad campaign that was very time restrictive. I use spray paint to sketch, sort of adjusting the proportions from the sketch to fit the wall, and then I will sometimes lay down base coats of roller paint to take up large spaces, and then everything else is spray paint. But it’s all a work in progress, I would like to experiment more with roller paint and getting painterly effects. I’m open to anything! 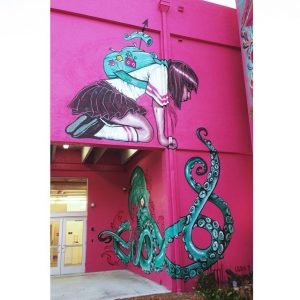 To make art inclusive to all humanity. To cloister art into the gallery realm is to remove art from the lives of most of the population. Artists are the cartographers of our generation, to quote a friend, and people need it, whether they know it or not. For urban landscapes to host the work of artists on its blank spaces is to treat the world as a precious canvas, not just a machine for us to pass through. Artwork activates the mind, it challenges everyday life, it allows us to live with the imagination, something that becomes harder and harder the older we grow.

Tough question. I’ve had a series of really important mentors in my work so far who have helped me get where I am, and who I rely on and trust to critique my work. But I have to be honest in that I try to be my own biggest influence. The art life is as much a process of getting to know oneself as it is defining one’s own work. The two are intrinsically linked.

I really want to paint some massive water towers, you know those cylindrical cisterns everywhere, and turn them into a crowd of sleeping creatures. Or perhaps paint some giant office buildings that are hopelessly ugly right now. There’s one giant brown wall in downtown Denver that I’ve had my eye on for a while, but I’m pretty sure it’s a law firm, so I’m not sure how to go about getting ahold of that one. I want to put a huge yeti there. 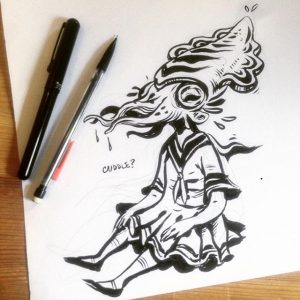 Sometimes I use hidden symbols, characters or nods to people I know, little totems. That’s something I do in my gallery work and I like to throw it into murals sometimes too. In the Denver mural (27th & Larimer), the silver aspen leaf is a reference to the street I grew up on. I paint a lot of squids because I like them. I go in and out of phases of painting various animals or images; there have to be common threads for people to recognize.

I am in talks with a friend who makes large scale urban sculptures in Denver; we’re trying to get ahold of a grant to install something in Boulder. Otherwise, I would love to keep painting out here; it just depends on when there is enough time! In terms of mural projects, I will be doing some big work in Alaska, Detroit and New York in the next year! Really excited!

Walking through tall, dry grass and letting the grasshoppers jump up onto you as you walk, Film on the Rocks at Red Rocks, hanging around Confluence Park, Stella’s, Pearl Street, hiking, kayaking and exploring. I lived around Red rocks for the last years of high school and I would always hike up behind Morrisson to this graveyard that I really loved. I miss the mountains so much. Take advantage of those beauties!

My favorite thing is to go to Stella’s on Pearl Street and order a Galloping Elf, hot or iced. It’s off the menu. Last time I went, they were out, and I nearly cried.. this time, man.. this time!!

Go see the art! Here’s where to find Lauren’s work in Denver: 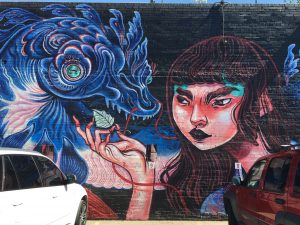 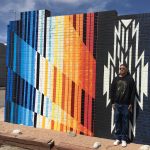 Anthony Garcia Sr. – @birdseedanthony Anthony grew up in the Globeville neighborhood of Denver near 50th and Broadway. As a teen he did graffiti and feels that hanging out with other graffiti artists all over the city eventually lead to his evolution into an artist who now does studio work and  Continue Reading